We had a lot of groups visit the Matthews Library this week. First, we had PSAT/SAT Preppers in on Monday, Tuesday, and Wednesday after classes.

Tuesday was very busy, with the Comparative World History class coming in to work on their Ancient Egypt Projects. Students also came in during lunch for some Cookies, Coloring, and Conversation time, while a small group watched the Dortmund vs. Real Madrid game.

The second meeting of the Political Puzzles Club came in on Thursday to discuss the Electoral College and voting access. Seventh grade History classes also came in on Thursday and Friday to work on their Middle East Cultural Projects, putting a whole table full of books to good use!

This week, the Matthews Library received a big stack of new books! They are currently being processed and will be ready by next Wednesday. Sorry, everyone’s going to have to wait!

Monday was the first meeting of the Political Puzzles Club. The club brings together students and faculty with a variety of political views to discuss political issues. In the first meeting, the club watched a TED Talk by Michael Sandel on “The Lost Art of Democratic Debate.” The next meeting will be Thursday, September 29 and will focus on the Electoral College and voting access.

This year’s first issue of The Octagon came out on Tuesday. Staffers Jack, Adam, and Benett came into Matthews Library looking sharp!

On Wednesday, 8th grade History classes came in to work on their National History Day projects. This year’s theme is “Taking a Stand in History.” Students found books in the Matthews Library on their topics, including: Title IX, Weather Underground, Harvey Milk, the Newsboys Strike of 1899, Rosa Parks, Flappers, and the Berlin Airlift. We’re looking forward to seeing their projects! 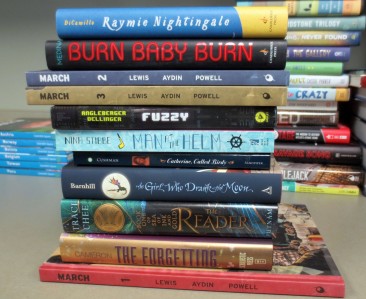 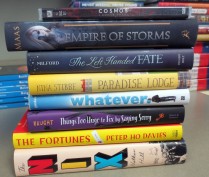 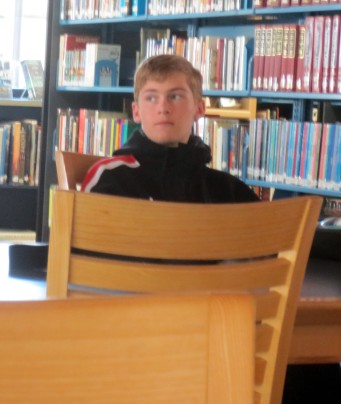 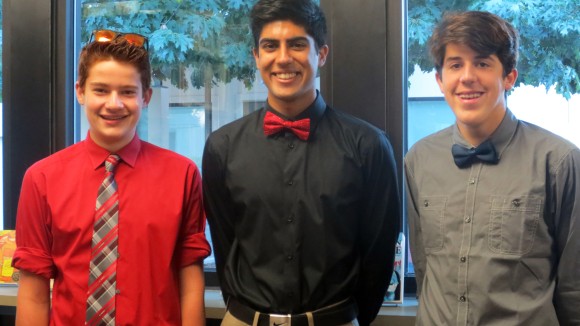 It was a fairly quiet week, except for the fire drill, and Book Club, and the High School meeting, and the Summer Reading Raffle, and Back to School Night. Oh, and the Chelsea-Liverpool soccer game today at lunch. Okay, it wasn’t really quiet.

The Summer Reading Raffle winners were Miles, Hailey, Erin, Anna, Juliette, Jacob, Brynne, Jada, and Bassem–some of them are pictured below with their prizes. Students did activities with their summer reading books such as creating new covers for them, training a dog to do a trick, and making pizza. You can see their work here.  Prizes included an iTunes certificate, Barnes & Noble certificates, zombie hand window clings (yep!), and flamingo paper clips (because you need them). 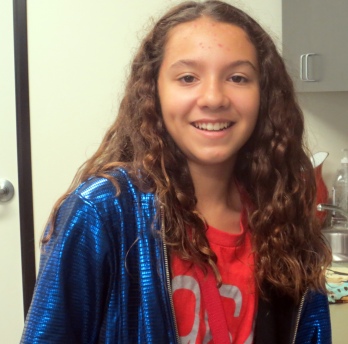 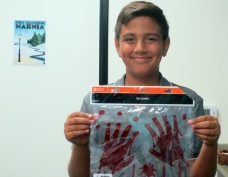 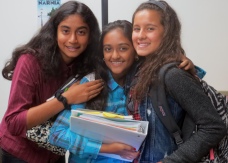 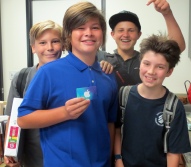 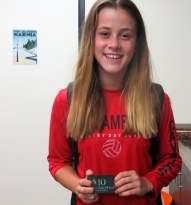 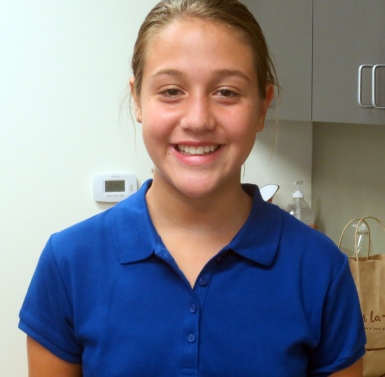 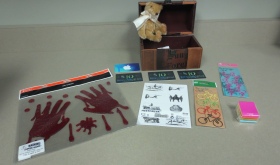 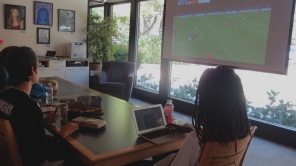 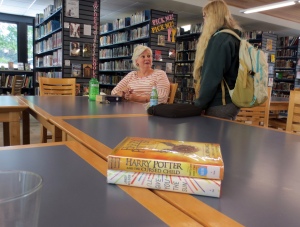 Sylvaine and Ms B continue a conversation started in Book Club.

Since we all just had a nice stretch of time off to relax and read, there was much to talk about at our first Book Club meeting of the year. Ms Melinson’s favorite book she read this summer was I’ll Give You the Sun. She is currently reading Harry Potter and the Cursed Child, which Anny, Luca, and Josh have all read with mixed reviews (Josh & Luca thought it read more like fan fiction and would have liked more stage direction; Anny liked that it filled in some blanks from the original series). Ms Melinson is also acquiring the illustrated versions of the Harry Potter series. So far only the first one has been published. Anny reread all of the HP series this summer along with a bunch of other books including Listen to This and Secret Lives of Composers–both books about one of her passions, music. Anny also discovered the poet, Christina Rosetti, and has been reading a lot of her work.

Josh read Dune and says it’s his favorite book ever. He proclaims “Frank Herbert is a genius!” Ms B says she’s read it 10 times and thinks it’s interesting that so many of the words are Arabic. It’s been 50 years since the original Star Trek tv series first aired. To celebrate, Josh has read Leonard: My Fifty-Year Friendship with a Remarkable Man by William Shatner as well as the Autobiography of James T. Kirk. Another one of Josh’s favorites this summer was the final book of the Lorien Legacies series, United as One. He and Luca agree that the I Am Number Four movie does not do the book justice.

Luca enjoyed Ready Player One and was excited to find out that Spielberg will be directing the movie version of it. Joe and Luca agree that one of Luca’s other favorites this summer, The Gunslinger by Stephen King “gets weird.” We’ll be looking for some more weird books for Luca soon.

Heloise recommends It’s Kind of a Funny Story by Ned Vizzini and a Spool of Blue Thread by Anne Tyler.

Ms B wanted to talk about her new way of reading classics. She has decided that they are to be savored and so has begun to read them slowly, looking up words as she goes along. She read Dante’s Inferno this way, and is currently reading Don Quixote. She recommends the translation by Edith Grossman and imagines that in the original Spanish it must be beautiful. Doctora agrees and says it’s amazing. 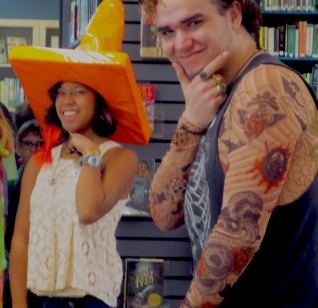 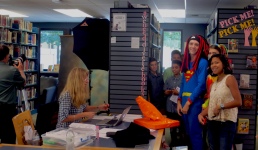 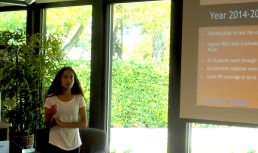 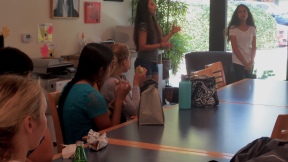 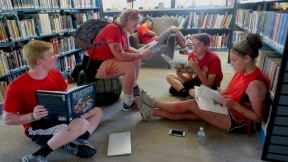 This week both our 8th graders and our 6th graders came in to pick up books for their reading projects. The 8th graders created pages on the 8th grade Independent Reading Site. There they will get to post summaries and reviews for their peers to comment on.

Wednesday was our first Leadership Lunch featuring Smita and Shriya speaking about Cognitive Exhange, a program where students mentor other students across the globe in speech and debate techniques. They are starting a club here at Country Day for students who’d like to be mentors. Sylvaine and Arvind, the Leadership Lunch Coordinators, are putting together a great program this year so stay tuned for more interesting presentations each month.

Thursday was picture day so we got to see everyone from the Middle & High Schools as they came in wearing their finest. Since the seniors have their portraits done later in the year for the yearbook, they get to dress up silly for their photos. We spotted Cookie Monster, a sumo wrestler, and superman. Others showed their spirit with patriotic props, face paint, and tattoos.

Friday was Ancil Hoffman Day and the black and red teams were also showing a lot of spirit. The black team won, again (legitimately) (seriously). 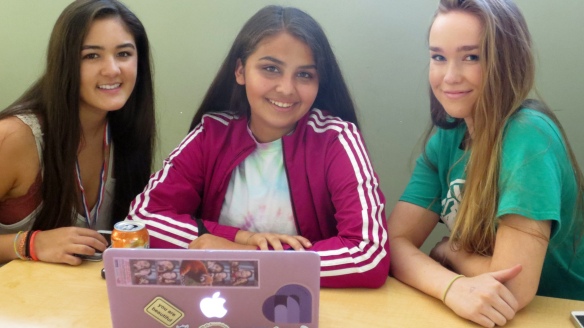 We’re back! The library was busy this week as usual. All sorts of activities happened in the library including a screening of an informative and entertaining video made for Freshmen by Sonja & Nico about the rules at Country Day. The 9th Graders learned a lot–including not to mess with Sonja! There were also parent orientation meetings as well as very helpful College Application sessions for our seniors (thanks, Mrs. Bauman & Mr. Kuipers!) 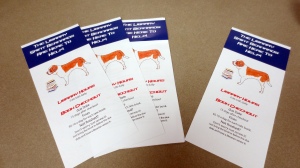 Some 6th graders learned the legend of the library St. Bernards when they came in for a short orientation.

Speaking of orientation, our 6th graders came in for a quick library orientation so they could find out where to find the books they want as well as how to log in to their email. Some of them even got to learn the legend of the library St. Bernards.

Ms. Melinson’s advisory met for the first time on Thursday to plan their takeover of the world–or really just to figure out who’s bringing snack each week and get to know each other (that way they’ll know who should do what when they take over the world). 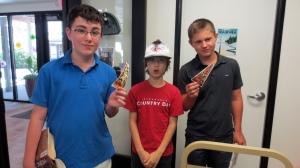 Book elective class received pizza bookmarks and checked out their first books of the year.

On Tuesday and Thursday, Ms. LaMay & Mr. Crabb’s Book Elective classes came in to check out books and get a slice of pizza (well in bookmark form–food for thought?) 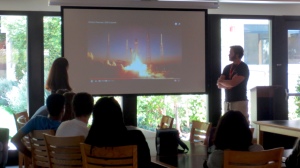 Employees from SpaceX captivated us with stories of their latest projects.

On Friday, Adrianne and Brady from SpaceX came in to speak to interested High School and Middle School students and teachers about their jobs at SpaceX and current projects.  Thanks again to Mrs. Bauman for arranging their visit–Adrianne is her niece. Here are three things we learned:

Today's #readingblackout focuses on reading with friends - both the human and the furry kind and features our dogs of Country Day wall. . . . #blackauthors #blackhistorymonth #librarydisplays #dogsofcountryday
Today we rolled out our Country Day Reads Kits for Mid-Winter Break! These kits contain 2-3 library books and some bookish gifties for students to keep. We hope you enjoy! And if you need a good book to read over break, be sure to visit sooner rather that later. Break is almost here! . . . #countrydayreads #subscriptionbox #yaybooks #yaylibraries #wearecountryday
This #readingblackout focuses on new books by black authors, including award-winners Genesis Begins Again and Tristan Strong Punches a Hole in the Sky. Be sure to stop by for some good reads for over break! . . . #blackhistorymonth #newbooks #blackauthors #yaylibraries