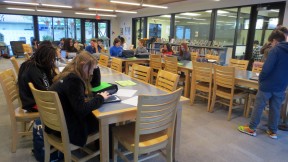 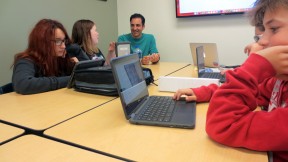 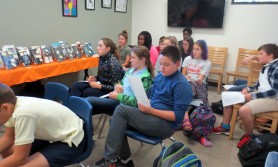 Mr. Kuiper’s 8th graders were in the library on Monday and Tuesday to find books and research topics for their National History Day projects, which range from suffragettes to Watergate to stem cells. On Monday and Wednesday Mr. Hagmann’s Film elective class was in the library to work on their projects about various film topics like Jim Carrey, Robert Downey Jr., and the use of color in Marvel movies. Wednesday and Thursday saw a flurry of books and Post-its as Ms. Melinson book talked a variety of titles for 6th and 7th graders, including some especially spooky books for Halloween. The kiddos chose some great books and just in time for the three day weekend. Happy reading! 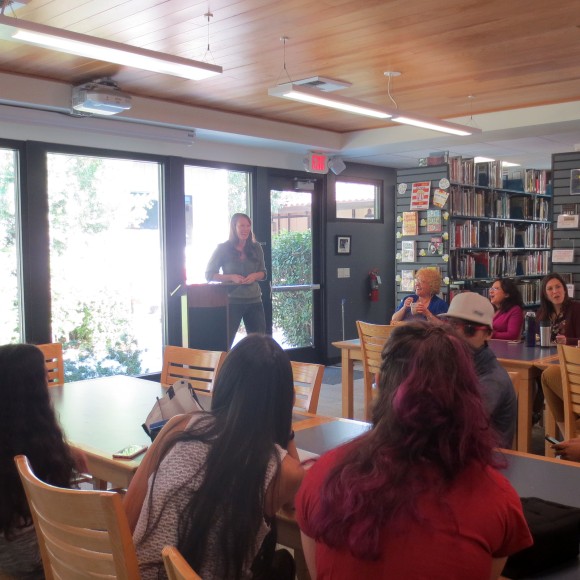 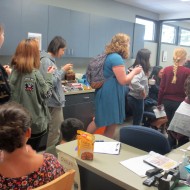 The middle schoolers were away on their field trips this week and the library was noticeably quiet in their absence. On Monday we had Misty Greene, pastry chef extraordinaire at Hawks in Granite Bay and Hawks Provision and Public House, visit us for World Food Day. Chef Misty talked about her passion for more good food literacy and her volunteer work with the Food Literacy Center, whose mission is to get kids to get kids to vegetables. If you’re interested in volunteer opportunities at the Food Literacy Center, let us know and we’ll get you connected. Misty also talked about how to break into the restaurant industry – by starting at the bottom and working your way up. Tuesday was the birthday of yours truly and Ms. Melinson made a yummy chocolate bundt cake (which I’m totally snacking on right now) Wednesday was our monthly Book Club, which you can read about here. On Thursday and Friday, 10th graders were in the library to find books and take notes, learn about Boolean searching, and find good keywords to search the databases for their Sophomore Project topics. The Glass Knife had their second meeting on Friday and had a spirited discussion on what this year’s theme should be.

The weather has turned colder, which means it’s time for Ms. Melinson to bust out the hot apple cider for the October Book Club! 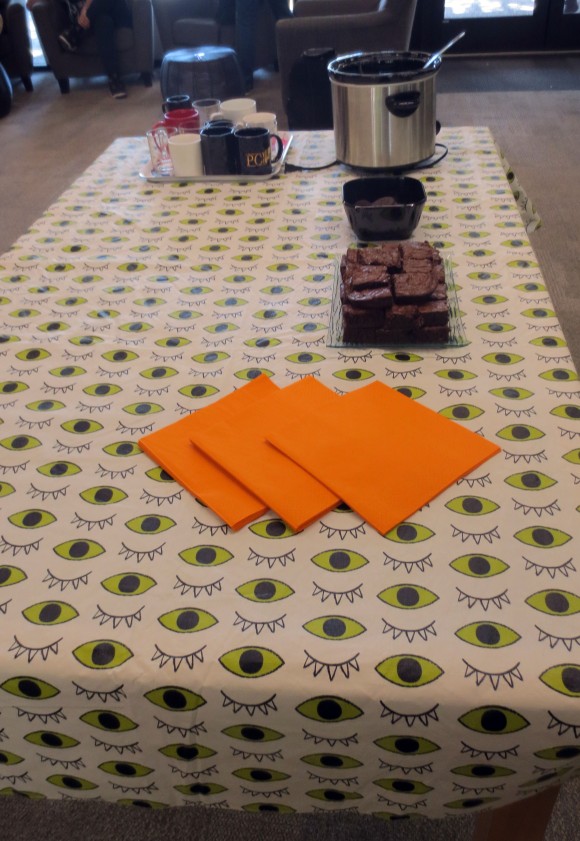 We had a jammed packed house for this month’s Book Club with no leftover brownies in sight. Ms. Melinson talked about a bunch of the new books we just received including The Education of Margo Sanchez, Genuine Fraud, Men Without Women, Dreamfall, The Bear and the Nightingale (which Emma loved. She described it as creepy, but not horror-movie scary), Dividing Eden, and Jane, Unlimited.

Ms. B read Steeplejack, which she called “fun and wonderful.” She also talked about Lapham’s Quarterly, a magazine that devotes each issue to one topic. Ms. B said she likes  magazines because articles have an easier stopping point whereas books seduce you into finding out what happens.

Luca started reading Robert Pinsky’s translation of Dante’s Inferno and was enjoying it. He also bought the best book ever, The Big Bad Book of Bill Murray, which is like a Bill Murray dictionary. Luca was also “snail-pacing” his way through Einstein’s Dreams and a few memoirs.

Heloise read Bel Canto and recommends it because it has a great writing style. Ms. Melinson said it’s one of her all time favorite books. Josh was excitedly waiting to read the new John Green book Turtles All the Way Down after an almost six year wait since his last book. (yours truly would like to interject that she has read the book and loved it!) Jackson said he went through the stages of grief as the last Harry Potter book was published, but decided to revisit the series via audiobook. Jackson was planning on reading Casino Royale and Ms. B warned him the the James Bond in the books is quite a different character from the one in the movies.

Joe started listening to The Way of Kings audiobook (which is a whopping 45 hours long!) but ended up rereading the book instead. Monique read the “All the World’s a Grave”, a play that uses different pieces of Shakespeare’s writing in one play, and loved it. Emma read Wicked Wonders, a collection of short stories about magical kids. Jewel read The Thousandth Floor, a book where the entirety of New York City exists inside a tower. Layla read Milkweed by Jerry Spinelli and liked it, though she found it quite sad.

To check out all of the books we talked about, visit our Goodreads page!

That blur in the middle of the screen is Luca racing to his seat so he doesn’t miss any of the Book Club fun! 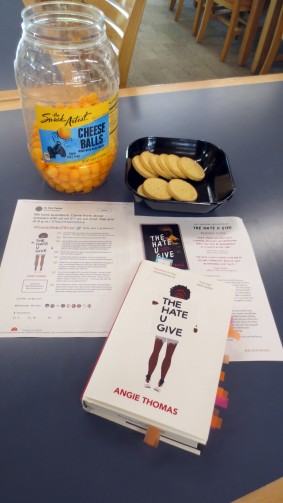 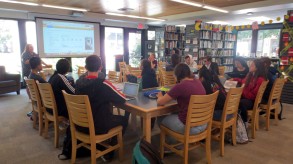 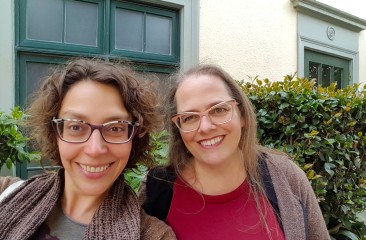 Though the week was shortened due to an in-service day on Monday, it was jam packed with spirit for Spirit Week! On Tuesday, Mr. Wells and Ms. Lacombe’s 10th graders were in the library researching local sources for their Sophomore Projects. That same day at lunch, students and faculty were invited to discuss the book The Hate U Give by Angie Thomas. Wednesday was the Senior Moratorium where seniors got to spend most of the day working on their college applications with teachers nearby to help out. Also on Wednesday, Ms. Melinson met with Mr. Hagmann’s Film Elective class to assist with their research projects.

On Thursday Ms. Melinson attended a BAISL (Bay Area Independent School Libraries) conference where she met with other independent school librarians to discuss e-books. Thursday also happened to be the Spirit Week Advisory Costume Contest where Ms. Melinson’s advisory (with Learning Specialist Mrs. Brown filling in for Ms. Melinson) dressed up in their best 1920s garb. On Friday Dr. Fisher’s class was in the library to re-familiarize themselves with NoodleTools and to learn the important distinction between paraphrasing and plagiarizing. Rounding out Spirit Week was the annual chalk mural on Friday, where students made pieces based on films from Japan’s Studio Ghilbli.

Agamemnon had a whale of a time picking out the winners for the Teen Read Week raffle!

Congrats, readers! Remember to stop by the library to claim your prize!

While the high schoolers were away on their trips, the 6th graders took over the library! This week the 6th graders got a crash course in how to use the library and its resources. Students spent the week evaluating websites, learning the lay of the land via a book hunt, and brushing up on their Dewey Decimal Classification sorting skills. Students also got to participate in a game of “Friendly Feud” where they answered questions based on the websites they evaluated in order to earn points and prizes.

This week is Banned Books Week and the library displayed some frequently banned and challenged books and the reasons for the challenges. Here’s Charlie and Elijah browsing the display.

Their favorite reason for a book being banned is “It is a real downer” for The Diary of a Young Girl by Anne Frank. 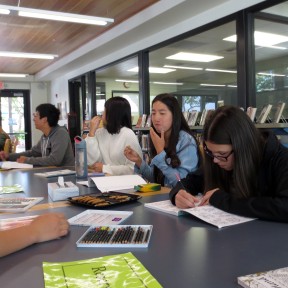 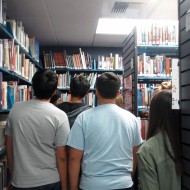 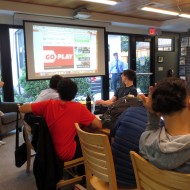 On Monday, Ms. Thomas’ AP Computer Science Principles class visited to learn about where to search for tech innovations, what white papers are, and how to write concisely, which is not an easy task! Tuesday was a busy day with Mr. Crabb’s 7th graders visiting to learn about databases as well as Cookies, Coloring, and Conversation at lunch time. Wednesday and Thursday saw Ms. Nellis’ 9th graders in to begin researching for their Ancient Civilizations projects. They even got to go on a field trip – to the 930s (the corner where the ancient history books are–we didn’t actually time travel to the year 930 although that would have been pretty cool!) On Friday we had a visit from our local public librarian, Kim, to deliver library cards to the 10th graders and talk about resources at the public library to help the Sophomores with their projects.

It’s beginning to look like fall in the library office!