We’ve had a busy holiday-filled week leading up to Winter Break. On Monday Dr. Whited’s  Biology class were back to continue working on their GMO projects. At lunchtime, the Glass Knife held their annual Latke Throw-down, which featured yummy foods, good friends, and Ms. Melinson reading The Latke Who Couldn’t Stop Screaming.

Tuesday featured music in the library as Ms. Keys’ orchestra and choir serenaded us with holiday classics to get us in the holly jolly spirit. On Tuesday and Wednesday we had Mrs. Pelle’s and Mrs. Scruggs’ advisories in for Wintercraft. We also had our monthly Book Club on Wednesday, which you can read about here.  On Thursday Mrs. LaComb’s advisory came in for Wintercraft…which turned out to be a cover for a surprise going away party! (though, some crafting still happened) One of our students, Loryn, is leaving us and her friends wanted to send her off in style. 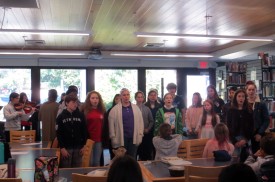 Friday was a madhouse, but for a good cause. The library was host to one of the Middle School Community Service options. Students made cards and wrote letters (and drew pictures – check out the one below from Brynne) to military service people, veterans, and first responders, and made gift tags, magnets, and bookmarks for Dyer-Kelly. At lunch, Ms. Bauman held a mini alumni panel for juniors and seniors to ask questions about their college experience so far. 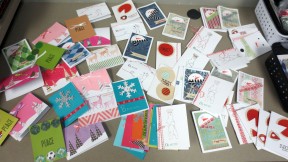 The week wouldn’t be complete without a visit from our favorite elf/library dog, Quaffle! 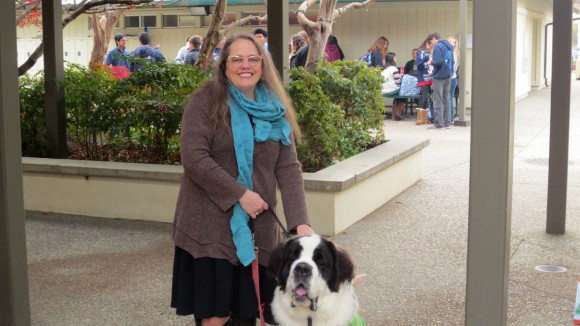 We had our last Book Club of 2017 on Wednesday with students and faculty talking about what they’ve been reading and what they’re looking forward to reading over Winter Break. Ms. Melinson discussed one of our new books, Sparrow, which she said was a good read with a pretty cover. She also asked if anyone had read the new John Green book Turtles All the Way Down because she had started it, but found the main character annoying.

Alyssa talked about finishing Dreamfall, which she really liked but was bummed to find out that the sequel doesn’t come out until next summer. Alyssa also talked about another creepy book she just started called Shutter. Heloise read Eleanor Oliphant is Completely Fine. She described it as more of a ‘mental’ book than an action book. She also read her first Murakami, Men Without Women, a book she described as “amazing”.

Savannah started reading Evicted: Poverty and Profit in the American City for her Sophomore Project, but ended up finishing the book because it was so good, though understandably sad. Larkin read Saving Hamlet on Becca’s recommendation and really liked it because it had a realistic high school setting – minus the time travel! Larkin also read City of Bones and found it disappointing. Emily said the first book is slow, but the series picks up with the second book.

Ms. Batarseh read Spade and Archer, which she described as “gritty” and a delight to read. She was not, however, impressed with Susan Sontag’s In America. Ms. Fel’s said she was reading a book about Algerian refugees. She couldn’t remember the title, but said it was a good read. Ms. Fels said she couldn’t recommend another book she’d read, Kinsey and Me: Stories by Sue Grafton, because it was awful and gave her nothing to think about.Jewel finished off Book Club by talking about a book she said had been looking at her in the library for a few days – The Teenage Brain: A Neuroscientist’s Survival Guide to Raising Adolescents and Young Adults, which was she found interesting.

To learn more about the books we talked about, visit our Goodreads page!

This week the library saw a mix of work and play as we rolled out Wintercraft for middle school advisories and played host to various classes working on projects. On Monday we had our monthly leadership lunch, which featured Emily talking about her experience of becoming an Emergency Medical Responder and performing a trauma exam demonstration.

Tuesday featured The Glass Knife holiday and gift bake sale, which helps fund The Glass Knife retreat in January. Tuesday also saw a double dose of Mr. Crabb, with his History classes in to continue working on their Middle East Cultural Fair projects and then his advisory for Wintercraft where they made magnetic bookmarks. 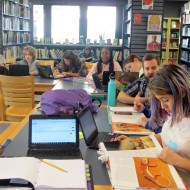 Wednesday and Thursday saw two more advisories in for Wintercraft, Mrs. Eustace’s and Mrs. Monahan’s. We also had Dr. Fisher’s History class in to work on their notecards and prepare for their interviews by contacting possible interviewees for their Sophomore Project. 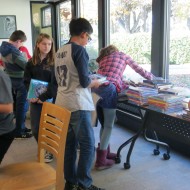 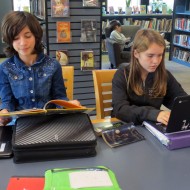 Happy December! We’re zipping right through this year! The week began with a Glass Knife meeting with staff planning for the Speakeasy and the upcoming gift and bake sale (at morning break and lunch time on Tuesday, December 5th). Midweek saw Mr. Crabb’s history classes in the library working on their Middle East Cultural Fair projects. The week closed with our annual lunchtime Speakeasy, which featured students and faculty sharing poems – including some originals. This year’s event also included a musical performance by Chardonnay and Lily, who played the Beatles’ “Eleanor Rigby” and Leonard Cohen’s “Hallelujah.”

We’ve been hard at work prepping for Wintercraft and Middle School community service – watch for your advisory’s turn in the coming weeks!

A couple new books to close out Pride Month🌈🏳️‍🌈🌈
School Library Journal calls this book, “An exemplary example of diversity with a Black girl protagonist, and characters representing a variety of cultures, skin tones, gender identities, sexual orientations, and religious affiliations,” which makes us happy, but we like what Rick Riordan says about it even better: “I want to live in this world.”
A teen girl navigates friendship drama, the end of high school, and discovering her queerness in Ophelia After All, a hilarious and heartfelt contemporary YA debut by author Racquel Marie. For grades 9-12.