For the final TED Tuesday of 2013, we showed a Talk given by Elizabeth Gilbert, the author of Eat, Pray, Love. Elizabeth talked about creativity and how we use the term “genius” and “brilliant” incorrectly when it is applied to art and artists. Her suggestion is that instead of calling an artist a “genius,” that we go back to the ancient idea of saying that they “have a genius.” 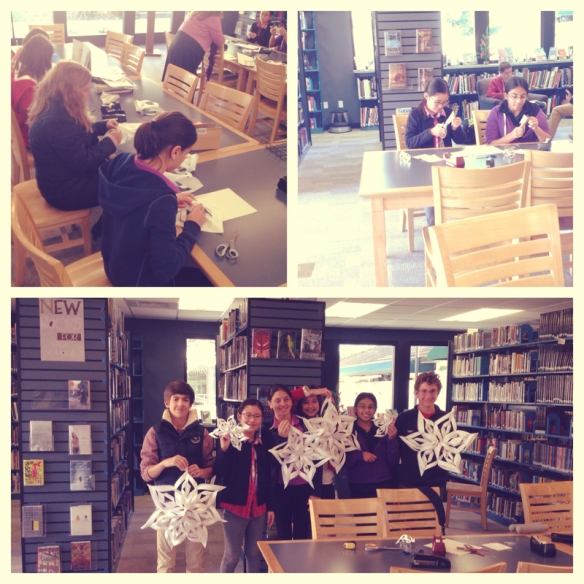 Today we had Ms. LaComb’s advisory in the library for a 3-Dimensional snowflake workshop. Ms. Melinson showed everyone how to cut, tape, and staple their way to creating a winter wonderland. 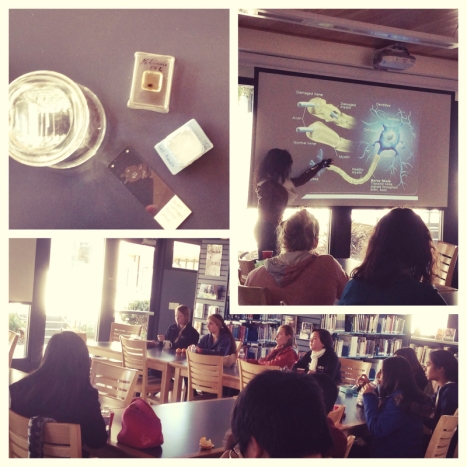 For our December Leadership Lunch Series, we had Melissa V. give a speech about her summer spent working in a lab at UC Davis. The project researched Multiple Sclerosis. Melissa gave us the background of the disease and told us about the progress the lab was making toward finding a potential cure.

Melissa spent over 100 hours in the lab over the summer, where her duties included making microscopic slides, backing up photos, and reorganizing a massive refrigerator full of specimen slides. She even brought a few samples of slides for everyone to see.

Today we had our 13th Annual Glass Knife Latke Throwdown.

What is a Latke Throwdown, you ask? Well, the story goes like this: a few years ago, a couple of students were arguing in the library about whose mom made the best latkes. The argument was getting heated. The solution was a simple one: bring in the latkes, and let everyone on The Glass Knife staff be the judge. That first year focused on traditional Jewish foods. In subsequent years, the party was expanded to include a variety of traditional foods from students’ families and cultures. Every year, Ms. Melinson reads The Latke Who Couldn’t Stop Screaming.

We didn’t have latkes this year, but we did have hot water cornbread, arroz con leche, matzo ball soup, a variety of Christmas cookies, and hot apple cider. It was delicious fun!

Today's #readingblackout focuses on reading with friends - both the human and the furry kind and features our dogs of Country Day wall. . . . #blackauthors #blackhistorymonth #librarydisplays #dogsofcountryday
Today we rolled out our Country Day Reads Kits for Mid-Winter Break! These kits contain 2-3 library books and some bookish gifties for students to keep. We hope you enjoy! And if you need a good book to read over break, be sure to visit sooner rather that later. Break is almost here! . . . #countrydayreads #subscriptionbox #yaybooks #yaylibraries #wearecountryday
This #readingblackout focuses on new books by black authors, including award-winners Genesis Begins Again and Tristan Strong Punches a Hole in the Sky. Be sure to stop by for some good reads for over break! . . . #blackhistorymonth #newbooks #blackauthors #yaylibraries